Cracks in your home's ceiling could be an indicator of much bigger issues in your home. All structures are prone to movement and settlement over time. Because of this, cracks are often a natural part of the aging process. They can, however, also be an indicator of serious foundation failure. The longer you wait to have your ceiling cracks repaired, the worse they will become. That is why it is important to contact the experts at Foundation Repair Services of Oklahoma as soon as the cracks appear. 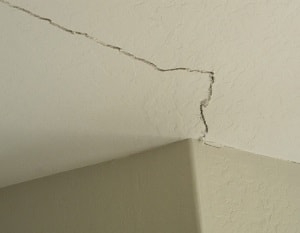 The location and size of the cracks can also help indicate whether or not they are serious. Tiny, hairline cracks can normally be fixed without too much trouble. But cracks larger than 1/16 of an inch are usually a sign of foundation failure. Cracks along the edges of the ceiling are typically not a big deal, whereas cracks in the middle of the ceiling could mean that the foundation has serious issues. If your ceiling cracks are the sign of foundation failure, they will probably require a more expensive, more complicated repair.

Because ceiling cracks are normally the result of a settling or sinking foundation, the most common repair method is underpinning. This process involves the installation of helical piers or steel push piers to support and lift the foundation to its original level. These piers stabilize the foundation to prevent future problems. Crack injection services may also help repair ceiling cracks, as they seal the cracks and prevent moisture or pests from getting through. For all of your ceiling crack repair needs, contact the experts at Foundation Repair Services of Oklahoma.