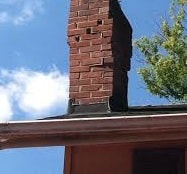 One of the largest yet most overlooked assets to your home is your chimney. Most homeowners do not consider their chimney when examining their homes for foundation failure. However, your chimney is very important when determining the health of your foundation, as it can show many telltale signs of a foundation problem. If you have a leaning or tilted chimney, or if cracks have begun to form in your chimney, it may be a sign of foundation failure. It is important to have this looked at by the professionals at Foundation Repair Services of Oklahoma as soon as possible. If there is an issue with the foundation underneath your chimney, you will probably be able to tell by checking the chimney for common signs of settlement. Some of these common signs include:

Solutions for Chimney Problems in Oklahoma and NW Arkansas Including Muskogee, OK

Chimneys are an incredibly heavy part of your home. Because of this, they must have a sturdy base. If they do not, they will probably settle or start to lean. There are many different foundation issues that can cause this to happen, including:

These can all lead to a leaning or tilted chimney. But no matter what happened to cause your leaning chimney, it is important to have it repaired as soon as possible to prevent worse problems from occurring. Fixing a leaning or cracking chimney requires you to go to fix the source o the problem, in most cases, a shifting or settling foundation. A foundation that has begun to settle of shift can be repaired using underpinning services. These underpinning services utilize foundation piers such as helical piers or steel push piers to lift and support the foundation. Contact Foundation Repair Services for more information. We provide quality foundation repair and underpinning for those in Oklahoma and Arkansas.